You’re reading an excerpt from the Today’s WorldView newsletter. Sign up to get the rest free, including news from around the globe and interesting ideas and opinions to know, sent to your inbox every weekday.

As has become customary, Ukrainian President Volodymyr Zelensky appeared virtually to address a gathering of attendees operating in far cushier circumstances than his countrymen. On Saturday, he urged the 575 delegates from 40 countries convening at Singapore’s Shangri-La Dialogue, Asia’s preeminent security forum, to defend a world where might does not make right.

“If there had been no international law and the big fish ate a small fish and a small fish ate shrimps … we would not have existed,” Zelensky said, quoting the words of Lee Kuan Yew, Singapore’s first prime minister.

Zelensky went on to hint at the broader implications of Russia’s invasion. Ukrainian officials have vociferously argued that had the international community taken greater steps to punish and prevent Moscow’s military adventurism — through more robust sanctions and greater military aid to Ukraine — then Russian President Vladimir Putin may have been dissuaded from launching his war of conquest.

“Today’s example of Ukraine is the example for the whole world,” Zelensky said. “The world must always support any action which is related to preemptive measures to forestall violence.”

Josh Rogin, global opinions columnist at The Post, was in the room in Singapore as Zelensky spoke and probed the subtext of the Ukrainian leader’s remarks in a follow-up question, asking what advice he had for Taiwan, which faces a similar threat of coercion and invasion from China as Ukraine did from Russia for many years.

“No one benefits from [war], apart from certain political leaders who are not content with the present level of their ambitions. Therefore, they keep growing their appetites, their ambitions,” Zelensky said, though he did not mention Chinese President Xi Jinping by name. “The world enables these leaders to grow their appetites for now, therefore we need a diplomatic resolution to support countries that are in need of help.”

🇺🇦 President Zelensky delivers a moving speech at #SLD22 highlighting links between events in Europe & Asia: ‘I am grateful for your support of Ukraine. But this isn’t just for Ukraine. It is for you as well – to ensure that our world and your world is safe.’ ⁦@IISS_org⁩ pic.twitter.com/5tkaDMY4xi

Biden pivots to Asia as Ukraine war rages on

The spirit of Zelensky’s address was on show the day prior. “Ukraine today may be East Asia tomorrow,” declared Japanese Prime Minister Fumio Kishida during the forum’s keynote address Friday. Kishida said the Russian invasion of Ukraine ought to be a wake-up call for the region. The steady expansion of China’s military footprint throughout the Pacific, the continued ballistic provocations of North Korea and Russia’s own strategic choices in Asia — including recent military exercises that saw Russia and China jointly fly bombers over the Sea of Japan — all loomed behind Kishida’s warning.

The Japanese prime minister has pledged to boost his country’s diplomatic and security presence in Asia and said Japan would even consider acquiring a preemptive strike capability — a development that could violate the nation’s post-World War II pacifist constitution. But, from Tokyo’s view, the strategic landscape may increasingly demand it.

“Little wonder that even if an overhaul of Japan’s constitutional article forbidding ‘land, sea, and air forces, as well as other war potential,’ remains unlikely, public opinion is shifting, and limits are becoming more flexible, with counterstrike capabilities now up for discussion,” wrote Clara Ferreira Marques, a Singapore-based columnist. “Even Kishida, whose family hails from Hiroshima and is less hawkish than others in his party, is pledging a substantial increase in defense spending, a step further from the pacifist mindset of recent decades.”

Japanese concerns, though, rarely reflect the prevailing mood elsewhere in Asia. In Singapore and in earlier summits this year, diplomats from a host of South and Southeast Asian nations have urged their Western interlocutors to cool what’s perceived as a headlong rush into a new Cold War — geopolitical standoffs with Russia and China, in particular, that compel other regional players to “pick sides” amid great power competition.

Defense Secretary Lloyd Austin appeared to have heard those messages. “Nobody should force binary choices on the region,” he said in Singapore. “Our fellow Indo-Pacific nations should be free to choose.”

But he decried China’s increasingly “coercive and aggressive approach” vis-à-vis its territorial claims in the region and warned against Beijing doing anything unilaterally to change the prevailing status quo with Taiwan. Austin, like others at the Shangri-La Dialogue, invoked the war in Ukraine.

“The Ukraine crisis poses some urgent questions for us all,” he said. “Do rules matter? Does sovereignty matter? … The rules-based international order matters just as much in the Indo-Pacific as it does in Europe.”

U.S. officials engaged in a mini-flurry of quiet diplomacy with their Chinese counterparts this past week after many months of no meaningful contact. On Monday, White House national security adviser Jake Sullivan held a four-and-a-half-hour meeting with top Chinese diplomat Yang Jiechi in Luxembourg, which U.S. officials described as “productive” and part of the administration’s efforts at “managing the competitive dynamic” with Beijing, according to Axios.

That meeting was preceded by Austin’s own “candid” sit down in Singapore with Chinese Defense Minister Gen. Wei Fenghe, where the pair discussed how to “strengthen the guard rails against conflict” and decrease risk of miscalculation on either side.

Members of China’s delegation at the Shangri La Dialogue look on, and film on their phones, as Ukrainian President Zelensky blasts disinformation and false narratives about Russia’s invasion. No applause from them as he ends his speech, but more photos. pic.twitter.com/Fr8jK2s0I7

Wei’s public remarks conveyed plenty of enduring frostiness. “We require the U.S. side to stop smearing and containing China,” Wei said, accusing Washington of being a “bully” and “hijacking” other Asian nations to go along with its agenda in the Asia-Pacific. “If someone forces a war on China, the [People’s Liberation Army] will not flinch.”

While Wei hoped for a cessation of hostilities in Ukraine, he said Beijing’s historic goal of annexing Taiwan “absolutely must be achieved.” China views the self-governing democratic island nation as part of its own territory, no matter the staunch opposition of Taiwan’s people and government to unification with the mainland. Wei warned that China will “resolutely crush” any attempt by Taipei to declare formal “independence.”

Beijing’s escalating rhetoric has been matched by a hardening strategic approach. According to reports, Chinese officials in private have conveyed to U.S. counterparts that they no longer view the Taiwan Strait as international waters, a position that could have operational implications for the world’s navies.

“While the Wei-Austin meeting seemed to be aimed at putting in place guardrails for Taiwan, the public back-and-forth shows that we face a long road to any kind of stability,” said Natasha Kassam, a Taiwan expert at the Lowy Institute think tank, to the Financial Times. 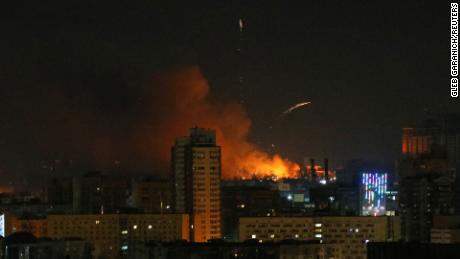 Higher food prices, falling trade: how the war in Ukraine could affect Africa