From the NY Fed: Total Household Debt Increases in Q1 2022, Driven by Mortgage and Auto Balances

The Federal Reserve Bank of New York’s Center for Microeconomic Data today issued its Quarterly Report on Household Debt and Credit. The Report shows a solid increase in total household debt in the first quarter of 2022, increasing by $266 billion (1.7%) to $15.84 trillion. Balances now stand $1.7 trillion higher than at the end of 2019, before the COVID-19 pandemic. The report is based on data from the New York Fed’s nationally representative Consumer Credit Panel.

Mortgage balances rose by $250 billion in the first quarter of 2022 and stood at $11.18 trillion at the end of March. In line with seasonal trends typically seen at the start of the year, credit card balances declined by $15 billion. Credit card balances are still $71 billion higher than Q1 2021 and represent a substantial year-over-year increase. Auto loan balances increased by $11 billion in the first quarter, while student loan balances increased by $14 billion and now stand at $1.59 trillion. In total, non-housing balances grew by $17 billion.

Mortgage and auto loan originations both declined in the first quarter, after historically high volumes in 2021. Mortgage originations were at $859 billion, representing a decline from the high volumes seen during 2021, yet still $197 billion higher than in Q1 2020, right before the pandemic hit the United States. The volume of newly originated auto loans was $177 billion during the first quarter, primarily reflecting an increase in auto prices. Aggregate limits on credit card accounts increased by $64 billion and now stand at $4.12 trillion–$224 billion above the pre-pandemic level.
emphasis added

Here are three graphs from the report:

The first graph shows aggregate consumer debt increased in Q1.  Household debt previously peaked in 2008 and bottomed in Q3 2013. Unlike following the great recession, there wasn’t a huge decline in debt during the pandemic.

From the NY Fed: 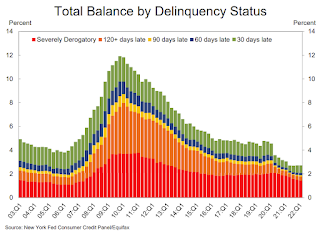 The second graph shows the percent of debt in delinquency.

The overall delinquency rate was unchanged in Q1.  From the NY Fed:

Aggregate delinquency rates were unchanged in the first quarter of 2022 and remain very low, after declining sharply through
the beginning of the pandemic. Delinquency rates have been low in part due to forbearances (provided by both the CARES Act and
voluntarily offered by lenders), which protect borrowers’ credit records from the reporting of skipped or deferred payments. Although
these forbearances have ended for most types of debts, the pause on student loan payments remains in place. As of late March, 2.7%
of outstanding debt was in some stage of delinquency, a 2.0 percentage point decrease from the fourth quarter of 2019, just before the
COVID-19 pandemic hit the United States.

There is much more in the report.