That’s the name of the economic session at the La Follette Forum on American Power, Prosperity and Democracy. A video of this panel is available through Wisconsin Eye (registration required). Here are some recounting and thoughts on the panel discussion. 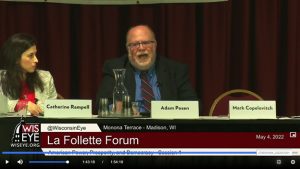 Catherine Rampell‘s presentation clearly laid out the interpretation of recent macro developments with respect to inflation and employment as a combination of policy choice and bad luck. On policy choices, there was the clear intent to avoid the mistakes of the (recent) past, especially the inadequately power fiscal stimulus of 2009-11. On bad luck, there was the unexpected (at least by some policymakers) arrival of covid variants both here and abroad,  supply chain constraints given the persistent shift towards goods consumption, and most recently the Russian incursion into the rest of Ukraine. She highlighted as an avoidable misstep the delay in nominating candidates for Fed governorships, one that could’ve prevented a more nimble response to persistent inflation.

As for policies to address both inflation — as well as growth — she tapped immigration reform and administration (highlighting the shortfall in foreign born workforce in recent years as exacerbating labor market tightness as well as inflation), and trade policy (the failure to remove the bulk of Trump’s tariffs, and continuing uncertainty in the form of investigations on circumvention of tariffs on solar panels).

Adam Posen presented a perspective taking in the broad sweep of America’s participation — or non-participation — in the process of globalization (a view explicated further in his recent Foreign Affairs article).

In particular, he points out that in terms of some standard metrics, such as the sum of exports and imports to GDP, the US stopped becoming more open by 1995. Perceptions have unfairly treated China as the main driver of changes in the economic prospects of workers (as represented by the work of Autor et al.) , when technical change could arguably be a much more decisive factor.

Hence, we (at home and abroad) are facing a corrosion of of globalization – where the corrosion denotes uneven decay, something which the covid pandemic and Russia’s assault on Ukriane have only served to accelerate. One dimension of this corrosion is the politicization of investment decisions (FDI, “friendshoring”) which feeds into declining dynamism.

In the end, Posen links economic performance to whether America becomes more divided, with a right wing swing to extremism, or manages to overcome this tendency.

Mike Knetter discussed some other aspects of the outlook. His main point was that we should look to  technological change, rather than trade or globalization, as the source of the tremendous churn in labor markets. Moreover, the way in which technological change — particularly in information technologies — proceeds (with greater concentration) will be a crucial factor in outcomes.

My presentation focused on the international role of the dollar, and how the aggressive use of sanctions is unlikely to induce a rapid move away from the dollar primacy.

My notes probably do not do justice to the panelists’ remarks and Q&A from the floor, so see the entire panel presentation here.