From the Association of American Railroads (AAR) Rail Time Indicators. Graphs and excerpts reprinted with permission.

U.S. rail traffic in April 2022 was like a box of assorted chocolates: it had something for everyone.
Optimists can point to several commodities that had solid traffic gains. For example, April 2022 was the
third best month ever for carloads of chemicals, with carloads up 3.4% over last year. April’s carloads of
iron and steel scrap were the highest since August 2013, while carloads of autos and auto parts were
up 12.0% over last year. Carloads of food products and crushed stone and sand were also up.

Pessimists can point to several traffic categories with lower volumes in April. For example,
carloads of grain in April were the fewest in seven months, coal carloads were the lowest in more than
a year, and carloads of petroleum products were their second lowest since September 2017.
emphasis added 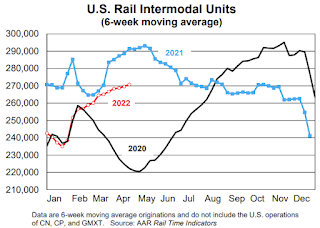